Anyone know how many of these there were?

There were 27 in all. From No.23, they became paperback with the final edition being in smaller format. They tried again a few years after Hugh Taylor died, this time it was edited by Ian Archer. It was renamed The Scottish Football ANNUAL and only lasted one edition.
Top

Thank you for the feedback.

The second hand bookshop on Great Western Road, up from Kelvinbridge underground, the name of which escapes me, had a couple of these last time I was in.

As did the book and music store in Ortego Lane, just round the corner from the above bookshop.

Do these books give any sort of coverage to Junior football?
Top

I've got a single copy of this: the one that covers the aftermath of Argentina. It's at me mams, so I'll reclaim it when I'm round there.

Top read as I mind btw.
It's the Hope I can't stand
Top

Burnie_man wrote:Do these books give any sort of coverage to Junior football?

IIRC not much if anything at all.

Whilst thinking about old books, does anyone know how many editions there were of 'The Scotsport Book' first published by Stanley Paul in 1963? I have the first one but can't find any more anywhere.
Top

Scotsport produced a variety of publications:

The Scotsport Book, 1963 (Stanley Paul). Hardback with dustwrapper, looked like an attempt to cash in on the success of Hugh Taylor's annuals but had a few articles on other sports.

The Scotsport Football Annual, 1965 (Pelham Books). Hardback with dustwrapper. Similar to above but only football.

Arthur Montford's Scotsport Yearbook, Season 71/72. An A5 card cover with a pic of the great Arthur on the cover. All football, with a good selection of colour photos.

Scotsport Yearbook No 3, 1973-74. Still A4, now perfect bound and thicker but padded out with adverts.

That seems to be the lot!
Top

Many thanks for that. I hadn't realised there was just one other Scotsport book around that time, which indicates there wasn't exactly a mass market for a general book on Scottish sport not overtly aimed at the OF even then. I can't recall the dust jacket (long since gone) or the price (it would have been cut off the dust jacket anyway as this was a xmas present) but here are a couple of pix of the main men from the 1963 book.

For the uninitiated and the criminally young that's Arthur Montford and Bob Crampsey. 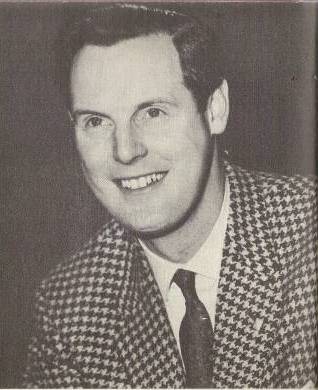 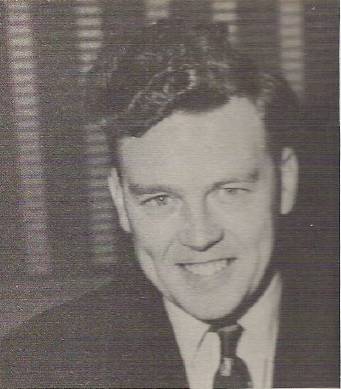 There were over thirty articles in the book. Most about football and most of those about the OF but plenty of general sports coverage as well.

Contents were:
Bob Crampsey on goalkeepers (no mention of Frank Haffey)
Alex Allan on golfer Bobby Walker who played in the Open at 16 and won the SPGA title at 18
Article on Jim Baxter
Alex Cameron on the 1960 Rome Olympics and boxer Dick McTaggart
Norman Mair on playing for Scotland at rugby
A seven-page article by Alex Allan on amateur golf champion Ronnie Shade
A feature on soon-to-be World flyweight champion Walter McGowan
Norman Mair on Hawick RUFC with the condescending headline 'The RANGERS of Rugby'
A feature on Jimmy McGrory
A two-page spread on how Scotsport covered that year's Wembley international (including pic of Arthur Montford with matching checked cloth cap!)
Archie Aikman speculating on the arrival of a European League (a 1960s staple for any football book)
Tony Chapman on physical fitness
Schools football in Glasgow
Alex Cameron on swimmer Bobby McGregor's bid to reach the 1964 Tokyo Olympics (he won a silver medal)
Referee Alex McLintock on the difficulties of being a ref
A two-page photo piece on the Scotsport studio
Six pages of football photos
Eight pages from Graham Gauld on racing driver Jim Clark
A Q&A with then Dunfermline boss Jock Stein
George Steele on the Second Division
Arthur Montford on football in New York ('Yes, they're taking their football seriously in New York now' is the conclusion!)
Johnny Hughes of the SPFA on the signing process
An article on how football is televised
A feature on Hampden Park
Nine pages on the 1963 international rugby season by Norman Mair
Four-page photo section on Ronnie Shade's Scottish Amateur golf win (the first of five in succession)
An article on Pat Crerand then with Man Utd - 'Once a Celtic Fan Always a Celtic Fan' (including a pic of Crerand shaving - must have been hard up for action shots)
A piece on the OF supporters associations and how wonderful they are. There's a brilliant caption 'A group of gay supporters at the 1963 Scottish Cup Final.'
Alex Cameron on professional athletics including a pic of what looks suspiciously like the original 'Scott's Porage Oats' guy
Three pages of pics of football stars (including a Crerandesque pic of Killie's Frank Beattie at his dinner, glass of milk in hand and bottle of HP sauce on the table)
Finally, three pages on the Wembley win of 1963.

I make it almost 60 pages of non-football content out of 128 pages in total. Maybe that was too ambitious and the reason for the next title two years later being fitba only?
Top

Hugh Taylor`s SCOTTISH FOOTBALL BOOK was 1st published in 1955 in good time to cover England 7, Scotland 2 ("The Tammies Drooped"), Scotland 2, Hungary 4("The Lions Hit Back" - eh? They lost!) & Clyde winning the Scottish Cup. There was no,"Oh, woe is me - Scottish football is mince" stuff in those days and Taylor was upbeat about everything pertaining to our game. Two other Scottish football books worthy of the bookshelf are ALAN BRECK`S BOOK of SCOTTISH FOOTBALL published in 1937 and Rex`s THE BOY`S FIRST BOOK of SCOTTISH SOCCER published in 1949. Sadly it was the "first" & last. The BOYS BOOK of SOCCER although predominantly English in content still has a reasonable amount of Scottish stuff especially Scottish Cup Final reports and the England/Scotland games for every season and a SCHOOLBOYS @ WEMBLEY piece which brings back memories. The 1st edition came out in 1946 and I think it ran until 1975. The WEE RED BOOK, of course, is a treasure trove although it has the annoying habit of a) being inaccurate on a lot of occasions & b) never giving game dates. I believe it started back in the 1920s. There was also an Evening Citizen JUNIOR FOOTBALL HANDBOOK but the only edition I have is 1960-61 & I don`t know the annual`s history. A few years ago all these books were reasonably easy to get hold of but I`ve noticed a sharp rise in price recently. I don`t know if collectors have suddenly woken up to the fact most folk chucked out their old football books once they`d read them. It`s not that long ago I picked up Richard Robinson`s golden jubilee history of Queen`s Park for a tenner AND I had a choice of quality of copies. I recently tried to bargain with a book seller on ABEBOOKS for a copy without any luck and as far as I know he still has the only edition on that webpage for £560! Similarly, ASSOCIATION FOOTBALL AND THE MEN WHO MADE IT of circa 1905 (4 volumes) was mine for less than £10 about 30 years ago. Now it`s heading for four figures. As for the ATHLETIC NEWS FOOTBALL ANNUAL, anything pre Great War well you`ll need a second mortgage - if you can get one.
Top

LEATHERSTOCKING wrote:Hugh Taylor`s SCOTTISH FOOTBALL BOOK was 1st published in 1955 in good time to cover England 7, Scotland 2 ("The Tammies Drooped"), Scotland 2, Hungary 4("The Lions Hit Back" - eh? They lost!) & Clyde winning the Scottish Cup. There was no,"Oh, woe is me - Scottish football is mince" stuff in those days and Taylor was upbeat about everything pertaining to our game.

Perhaps because he had good reason to?

It's undoubtedly true of Taylor's later books that 'whatever happened to...' and 'when will we see their like again?' are regular features. By today's standards, though, he is undoubtedly harsh. In 1970-71, for example, he berates the performances of Scottish clubs in European football for that season - when Celtic reached the European Cup quarter-final a year after reaching the Final and, of course, Rangers were about to win the ECWC the following year. God alone knows what he would have made of this season's performance! 1970-71 looks like a golden era to us now.
Top

I hesitate before offering a criticism of Hugh Taylor, who was held in god-like reverence after writing the centenary history of Kilmarnock but perhaps he should have been critical early on. A 7-2 Wembley humping a year after the humiliating 7-0 defeat by Uruguay in the 1954 World Cup hardly suggests that Scottish football was in particularly good health in the mid-1950s.

As for his criticisms of European performance in 1970-71 it has to be viewed through the prism of what went before. In 1971 Ajax Amsterdam were seen as a side that had luckily reached the European Cup Final two years previously where they were soundly spanked by AC Milan. No one could take seriously a club named after a cleaning fluid and it was considered a shock when Celtic were defeated by them. The second leg of Celtic's tie v Waterford came in for particularly heavy criticism.

Rangers, Aberdeen and Kilmarnock all lost first round ties, Dundee United were beaten by the unfancied Czechs of Sparta Prague and while Hibs losing to Liverpool was no disgrace they were expected to do a bit better than lose both legs of the tie.

It was also the first time in five years that no Scottish club had reached the semi-finals of a European competition. That was the level of success we were used to.

Of course if we were offered one club in the last eight of the Champions League and another in the last sixteen of the UEFA Cup nowadays we'd take it right away.

It clearly took Hugh Taylor a few years to realise that the 1950s "Golden Era" was over but by the early 70s it had sunk home. But he was only following in a long line of Jeremiahs. By 1888, the Scottish Football Annual was bemoaning the loss of Scotland`s supremacy - a 3-2 deat away to England, a draw with Wales & "only" a 7-0 win over Ireland. It`s all relative. Was Scotland actually any good after professionalism was legalised in England(1885)? We managed to stay ahead of the Welsh & Irish and held our own vs. England but didn`t trade punches with anyone else of note for nearly half a century until the Austrians showed us how in 1931 and then we more or less shrank back into our tartan shell until 1954 by which time we were virtually irrecovably lost. It didn`t take too long for European club sides to find a way to nullify our traditional British game and, with the odd illustrious exception we`ve been a few notches below being 2nd best. Ah, there`s nothing like a good wallow! If it would stop raining, I`d feel more cheerful.
Top

Is anyone who has the 1962 and 1963 Hugh Taylor books able to scan the Partick Thistle articles (if there are any) and email them to me?
[url=http://www.PTEarlyYears.net/]Partick Thistle - The Early Years - A Club History Online[/url]
Top

I've got the 1962 book - I'll check it at the weekend and scan anything for Monday.
Top
Post Reply
18 posts