Here's the details I have

Ah, happy days. I remember that Cup run well. And how it ended in bitter disappointment. We beat Thistle 3-0 and Hearts 2-0 at home then Motherwell 1-0 away. Into the semis having beaten three First Division sides without losing a goal and looking forward to Aberdeen (then as now nothing special). But the Dons complained about always having to play semi-finals in Glasgow (though it was noticeable they never whinged when they were splitting 60,000 or more gates with the Old Firm).

So the SFA got the slide rule out and sent the teams to Muirton Park, Perth which was equidistant from Aberdeen and Kilmarnock. It was also a dump, totally unsuited for a big game. Nearly 26,000 squeezed in to see 'Cup-tie McKay' score the only goal for the Dons who went on to beat Celtic in the Final.

I used to take my Boys Brigade bugle to games but sold it for ten shillings at Fir Park in the quarter-finals and the BB were demanding full payment. I asked the guy I'd flogged it to to sell it back to me but he in turn had sold it on - for a can of McEwan's Export!

Also at Perth (and apologies if he reads this) a cousin of mine turned round to me and said "look at that, see that guy down there behind the goals fighting with half a dozen polis. He's the spitting image of my big brother."

Naturally, his brother's seat was empty on the train back.

Some things never change though. This is from the match programme v Hearts. "The latest attendance figures show that our average home league support is around the 6,000 mark, a figure which should be improved on when one considers the standard and variety of football which has been available at Rugby Park this year..." 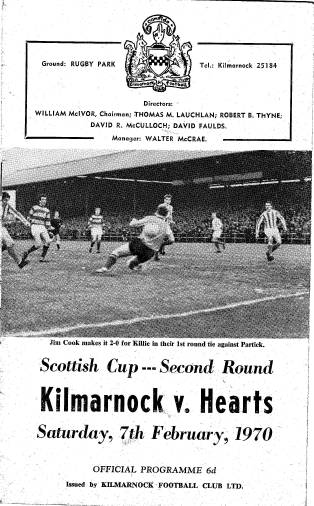 So what happened then about the bugle? Did you get 'drummed' out?
Top

I think your mince pies have had a dash too much brandy in them.

I never went back. I joined the Sea Cadets instead - for the flared trousers. Well, it was 1970 after all