by LEATHERSTOCKING
I was brought up with almost every ground I seem to recall having a large half time scoreboard. Match programmes had an explanatory code so that eg. A= Aberdeen vs. Celtic, B= Clyde vs. Hearts etc. and the boards had the corresponding A to G or whatever with a space for the score beside each letter. There`s many a footie photo with the boards in the background @ the top of the terraces. I know Hampden didn`t have one and the half time scores there were read out in a very cultured voice over the tannoy by, I think, Mr.Gillies the club secretary. I don`t know when these boards started or when they eventually disappeared but I suppose it must have been soon after transistor radios appeared.

by the hibLOG
Funnily enough I just posted this picture a couple of minutes ago in the Joe McBride thread of Easter Road in 1970 with its big half-time scoreboard: by Scottish
The old Rugby Park scoreboard was quite distinctive as it had a larger than life-size Johnnie Walker character attached to the left hand side (as you looked at it). It was situated at the back of what was the Rugby Road end terracing and had sixteen spaces A-P for half-time results with the corresponding fixtures printed on the back of the match programme. Inevitably the last two or three fixtures from the lowest division were omitted. The board was taken down in the close season of 1990 so it lasted a lot longer than the arrival of transistors.

by Alan McCabe
I was told by a Falkirk fan of the 1950s and 60s of the time when the guy with the bucket of numbers was accused of being drunk!
At a Reserve League Cup tie around 1962, the boards displayed a '9' and a '0' next to Match A on the programme, this first game being the reverse fixture in the senior League Cup.
Clearly disbelieving that Falkirk were 9-0 down on the opening day of the season at Motherwell, the fans barracked the white-jacketed volunteer.
"A' only dae whit a'm tell't" came the reply....and he was right!
Falkirk evidently rallied in the second half and came within eight goals of pulling level.

by Scottish
A true story is the Celtic-Partick Thistle League Cup final. When the half-time score of 0-4 was put up around the country, almost 100% of fans believed it was the wrong way round.

by Gunboat Briggs
I believe Tannadice may have had the last remaining old-time scoreboard, it was still in use during the 1991-92 season, up until the ground started to be converted to all-seated. I think the board were worried about the effect on programme sales if the switched to this new-fangled idea of reading the scores out!

by Scottish
Funny how the memory plays tricks. I could have sworn the Walker figure was on the other side of the Rugby Park scoreboard. 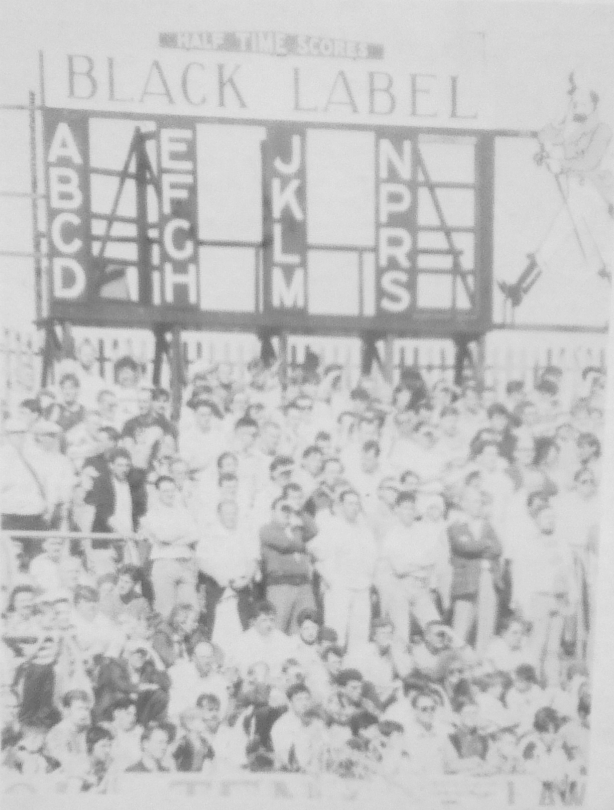 I wonder if it might've been Cappielow - the Sinclair Street end? It's still there now I think with a big advert for ferries covering it, but in the present day ground pictures in Image of Sport Greenock Morton 1874-1999 it's there in all its alphabetic glory, in a picture which must date post-1996 going by the advertising hoardings.

by LEATHERSTOCKING
Third Lanark`s was at the back of the East terrace, the end where their pavilion was I`m sure. Wasn`t Firhill`s @ the canal end where the blocks of student flats are now? Maybe my minds failing but Rangers` was @ the Paisley end because I seem to remember having to squint into the sun on a winter Saturday to see the scores.
All times are UTC
Page 1 of 1
Powered by phpBB® Forum Software © phpBB Limited
https://www.phpbb.com/