by Shawfield Boy
Clyde's Promotion means we will renew acquaintance with Dumbarton next season.

Dumbarton are our "oldest" opponents, we first met them competitively in the Scottish Cup on the 22nd November 1879, so this fixture has been running for 140 years. All the teams we previously met competitively no longer exist.

I had a look to see if there was another post on this subject, but couldn't find one so thought I'd ask where this fixture fits in in terms of oldest fixture still happening (or still possible) in Scottish football.

by ScottishFA
Going further back, Rangers played Dumbarton in the Scottish Cup on 28 November 1874. And the first Edinburgh derby was 25 December 1875.

by LEATHERSTOCKING
In November 1871, Queen`s Park were due to play Donington School in the 1st Round of the new Football Association Challenge Cup in Glasgow but the pair couldn`t agree a date so both, as per the rules at the time, progressed into the 2nd Round when, again no convenient date could be found due to it being school term time and the cost of getting from the village of Donington to nearby Spalding In Lincolnshire and thence to London and on to Glasgow so the schoolboys scratched. The school is now called the Thomas Cowley High School and could, theoretically, still play Queen`s Park. A team from Donington did travel to Glasgow in 1972 to mark the non game centenary.

by LEATHERSTOCKING
Missed out two other possible fixtures predating the Rangers vs. Dumbarton game; Queen`s Park scratched to Oxford University in the semi finals of the FA Cup in the Spring of 1873 and, as there is still a University Football Club, that`s still on the cards and on 21st March 1874 Queen`s beat Clydesdale 2-0 in the first Scottish Cup Final. If the cricketers revived their football section, I`m sure the Spiders would be glad to beat them again!

by LEATHERSTOCKING
West of Scotland Football Club played Edinburgh Academicals Football Club on 15th November 1867 when the differences between the handlers` version of football and the dribblers` was infinitesimal eg. Queen`s Park(by then 4 months old) played games with anything between 10 and 16 a side and their recorded scores include touchdowns. There is no record but it is unlikely that the young men constituting the Queen`s Park and WoS clubs working in the same environments and living in similar housing DIDN`T hook up for games.

The First recorded Edinburgh derby was 25 December 1875 we reckon that they must have played earlier than that. There are 10 Saturdays in 1875 before the 25th Dec that we don't have a record of a game being played.

John Cochrane recalls in 1939 that the first Derby was a 3-1 victory for Hearts in 1875. If that is true the game must have been played before 25th Dec.

No other record of that game has surfaced. 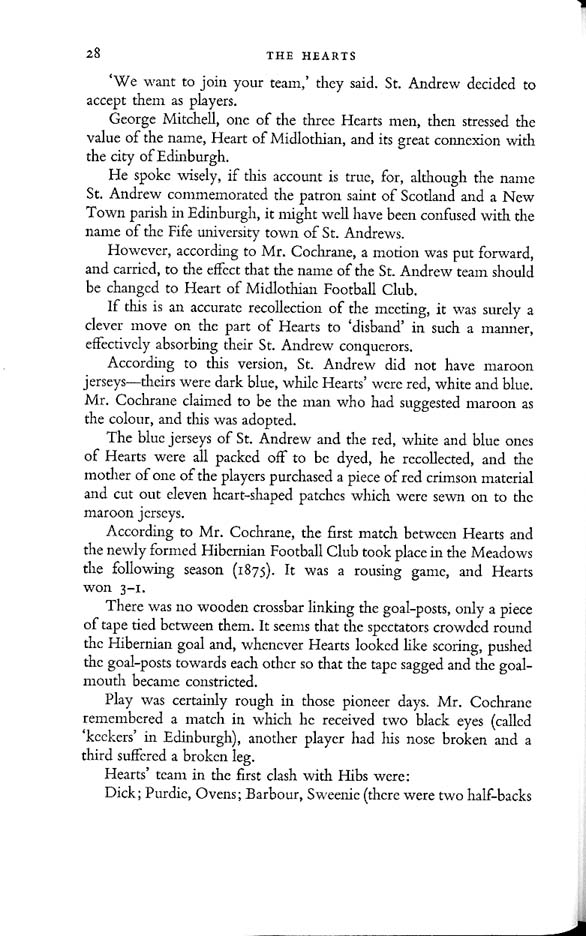 by Alan McCabe
The Clyde v Dumbarton possibility raises the question, once more, of one club or two since Dumbarton did close down for a lengthy period after their loss of a Scottish League place in the late 1890s
All times are UTC
Page 1 of 1
Powered by phpBB® Forum Software © phpBB Limited
https://www.phpbb.com/