The place to recommend books to other Forum users. Or even to warn off.
Post Reply
11 posts • Page 1 of 1

Or the greatest load of balls you'll ever read. A statistical analysis, drawn up by the AFS which just goes to show there are indeed lies, damned lies and statistics. Have a look at their top 100. The first inkling that something is seriously amiss comes with the ranking of one Diego Armando Maradona - sixth! Obviously everyone has their own opinions but IMHO any tome which places Maradona any lower than second (and I would rank him one place higher than that) is dodgy. For the record the players supposedly better than Maradona are (in addition to Pele) Ronaldo, Romario, Figo and Zidane.

Missing from the top 100 entirely are George Best, Bobby Moore and Eric Cantona to name but three that most people would find a place for.

The only Scot to feature is Kenny Dalglish at 25, one place ahead of Ali Daei of Iran. That means no Denis Law! Maybe he can take some comfort in the similar exclusions of other ex-Man U players like Cantona and Best but relax a bit knowing that Gary Neville is in there at No 86!

I had a quick skim through their Scottish section and was astonished to find two East Stirlingshire players in their Scotland teams of the decade. Eddie McCreadie makes the 1960s list and George Wood the 1970s one. Both were decent players, true, but their achievements in the game came long after they left Firs Park.

In short a waste of time, effort and money. Aimed at the Xmas market I get the feeling that some of the exclusions were deliberate and aimed at getting acres of publicity. In this they will succeed. But if there is any discernment left in a book-buying world that can make Jordan (the pneumatic 'model' not the toothless footballer) a best-seller then this book will quickly find its way into the 99p basement bargain bucket in pretty short order.
Top

It does seem a curious list to leave out Best, Moore and Law - arguably the three best ever players produced by NI, England and Scotland!

I would always have Maradona ahead of Pele as number one. Maybe it's because Pele came a bit before my time but I've never really bought into the reverence surrounding him. Seems to me he lacked the courage to test himself regularly against the best by moving to one of the top European leagues and was content to have his World Cup circus every four years.

Would have been interesting to see if he coped with the pressures that Maradona faced at club and international level. Pele was surrounded by good players; Maradona wasn't. Pele enjoyed a revered status in the comfy confines of the Brazilian league for most of his career whilst Maradona faced the harsher realities of the Spanish and Italian leagues - the former of which nearly ended his career.

Santos may have won the discredited World Club Cup twice against Benfica and someone else but that was about it. The behaviour of the South American clubs in the 1960's and 1970's against European opposition in this tournament does not give any credibility to the idea that a South American league was superior to a top European league. The games usually descended into a brawl at the South Americans insistence - as Celtic found to their cost in 1967.

The fact Pele chose not to compete regularly at levels other than the parochial Brazilian league and the comically short-lived American league seriously diminishes the claim he is the best, imo.
Top

A bit harsh on Pele, I think. Very few Brazilians played in Europe in the 1960s. In fact top Brazilians only really appeared on the European scene in the 1990s. No member of the Brazil teams that won three World Cups between 1958-1970 played in Europe. The first South American to play in a World Cup-winning team while with a European club was Valencia's Mario Kempes in 1978. And there were no European-based players in ANY Brazil World Cup squad until Falcao (Roma) and Dirceu (Atletico Madrid) in 1982.

So if Pele was "lacking courage" so were the overwhelming majority of South American players of his day. It wasn't a matter of 'choice' it was just the way things were.

However I do agree that Maradona was the better player and that's virtually heresy from someone of my age who IS old enough to remember Pele (though not ALL of his career I hasten to add). Like many of my generation I was convinced I would never see a better player than the Brazilian. For me the moment lightning struck twice when Maradona scored against Belgium the way he had against England in the 1986 World Cup was when I became convinced the Argentinian was superior. As you say Pele had many great players around him (hardly his fault) but Maradona dragged an ordinary side to World Cup triumph.

To be fair to Pele and Brazil when they did travel abroad they did so in the style of true champions. Nothing was too good for them and when it came to preparing for the 1966 competition they were determined to use the most up-to-date, state-of-the-art facilities available.

As this picture proves. 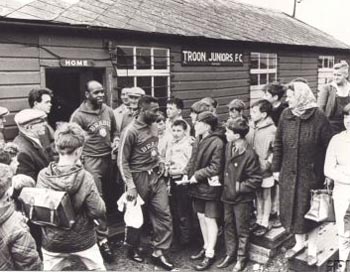 Good to see yer Mum turned up with her shopping & headscarf to smile @ the Great Man, Davie.
Top

How do you know that WASN'T my mother?

The clothes are quite illuminating. Heavy coats, caps, scarves, duffel coats, anoraks. This, remember, was in JUNE!

Actually as kids we were all a bit blase about sporting celebs. In those days virtually every sporting visitor to Scotland was based at the Marine Hotel in Troon and footballers always used Rugby Park and/or Portland Park for training. On one occasion I managed to get a direct snowball hit on Alan Ball. But Ayrshire kids took it all for granted, blithely swapping autographs along the lines of "Ah'll swap ye a Pele fur a Puskas." "Aye, aw right but only if ye gie me an Arnold Palmer and a Gary Player fur ma Jack Nicklaus."
Top

The family resemblance - headscarf, shopping bag, smile. Why did you turn your back on the camera anyway & what was in your satchel?
Top

Do you know of any approaches by European clubs for Pele that he refused? It's hard to believe that no-one, particularly the Italians, didn't try to sign him in this period even if there was no precedent of Brazilian players in European football. It's not a crime not to have played in Europe but the fact is that by his mid-20's he'd won everything he could with Santos in Brazil. I just think a truly great player would have sought a fresh challenge and must have known that could only be found in European football.

In my view, it's difficult to measure the nature of his achievements outwith the World Cup where he had the benefit of a very strong side around him - although he was undoubtedly a talented player himself. What's his domestic goals record again? 1000+ goals or something like that? It's like when the Golden Boot was changed in Europe because obscure leagues were recording ludicrous goalscoring levels.

It's not his fault, of course, but all those factors will always count against him in my book. Maradona ended up a fat cokehead, I suppose. Swings and roundabouts.

That's a nice picture. It needed a doocot and a bottle of Irn Bru to top off the 'Sunday morning team going for a game' look.
Top

lbb wrote:Do you know of any approaches by European clubs for Pele that he refused?

There was certainly talk about how he would be 'ineligible' to play for Rangers!

On a serious note the same argument could be made in reverse about Di Stefano - a South American who did move to Europe - and Best, neither of whom ever kicked a ball in a World Cup Finals.
Top

scottish wrote:There was certainly talk about how he would be 'ineligible' to play for Rangers!

All he had to do was renounce the Pope in the marble staircase and the shirt was his.


scottish wrote:On a serious note the same argument could be made in reverse about Di Stefano - a South American who did move to Europe - and Best, neither of whom ever kicked a ball in a World Cup Finals.

Di Stefano - maybe. And Best was a sensation at Man Utd but nowhere else. I guess the thing about these two players is that, outwith perhaps those of Man Utd and Real Madrid fans, they rarely top greatest footballer lists. Pele is as much of a certainty to top these polls as 'Bohemian Rhapsody' is to top the greatest singles. It's an odd thing for a man who played most of his career in another continent, in the age before global television, and retired before the global media coverage of the game really took hold.
Top

Your last point is intriguing. How many times do you hear someone saying 'Ronaldinho was poor tonight' when the guy is on our screens virtually every weekend. Maybe if we only saw big tournaments and finals players would be viewed differently. Conversely if Pele had been born twenty years earlier then his career would have been over before TV became widespread. I think it's a mark of Pele's talent that he did achieve global status despite being seen in competitive matches on live TV in Europe maybe a dozen or so times in his career.

I don't know about Di Stefano but recognition of Best's talents certainly transcends club allegiance. IMHO he is the most talented British football player I have ever seen.

'Bohemian Rhapsody' is more of a manager than a player - a Jose Mourinho perhaps. Original at first glance, pretentious later on, repetitive after a while and eventually long outstaying the original welcome.
Top

People are being a bit harsh about this book. Of course we have our opinions about who is the best player. Especially ones we have never seen play! But can we back them up with statistics? Is it possible to come up with an OBJECTIVE list of the best players?

(a) he never played in the World Cup finals

One flaw in the book is that "player of the year" titles count towards the rankings - which means they are partly subjective. At least, the opinions of people at the time are being used, rather than at 40 or 50 years' distance.
Top
Post Reply
11 posts • Page 1 of 1