The place to recommend books to other Forum users. Or even to warn off.
Post Reply
6 posts • Page 1 of 1

Exactly what it says on the tin. This will be available later this year. In the meantime you can download a sample HERE
Top

And another, more complete, sample HERE

The book will be available very shortly.
Top

This should be available within a couple of weeks. 740 pages, paperback. I've tried to keep the costs down but the ridiculous retail charges means I have to go to the recommended price of £24-50 if bought from elsewhere than Lulu. I've set a 25% discount on Lulu so the price there will be £18-38 NOT including postage. Still a bargain, I hope, as the back cover blurb explains:

For the first time the history of Scotland’s football managers is told in a single book. All the greats are in this ‘Who’s Who’ - Willie Maley of Celtic and Bill Struth of Rangers and the men who challenged them in the pre-war days like John ‘Sailor’ Hunter and Pat Travers. Celtic’s Jock Stein who was the first British manager to win the European Cup, his Rangers opponents Scot Symon, Willie Waddell and Jock Wallace. Alex Ferguson and Jim McLean, who broke the Old Firm’s control of the game. Graeme Souness and Walter Smith who restored Rangers to greatness and more recent managers who have enjoyed great success like Martin O’Neill, Alex McLeish and Gordon Strachan.

There are almost 700 entries, arranged in an A-Z format, ranging from a few lines for those with the briefest of careers to over twenty pages for the most important. And there’s a 90-page section on managers of the Scotland national team as well. You’ll also find out some of the oddities of the game over the years. The manager/s who:

rewarded his players for avoiding relegation with colour TV sets - only to discover they had been stolen from a rental shop in Glasgow.

found it easier to work in Iraq, Iran, Libya and Zimbabwe than Stirling where he was forced out by player power.

started off in Libya and ended up in Dundee via Mansfield and other points in between, quoting Shakespeare and Goethe along the way.

boycotted the local paper because it had a bigger photo of his rival in it.

tried to persuade Barcelona to buy his striker instead of Maradona.

went off on holiday while their teams played vital relegation matches

was appointed after beating ‘Miss Scotland’ to the job.

were sacked while top of the league and unbeaten.

was in charge of two clubs on the same night.

ended up managing their national teams after starting out at Cowdenbeath.

took the strips to be washed - AFTER being sacked.
.

Their stories - and many more - are all here, in the first ever ‘Who’s Who’ of Scottish football managers. These are the stories of the GAFFERS. 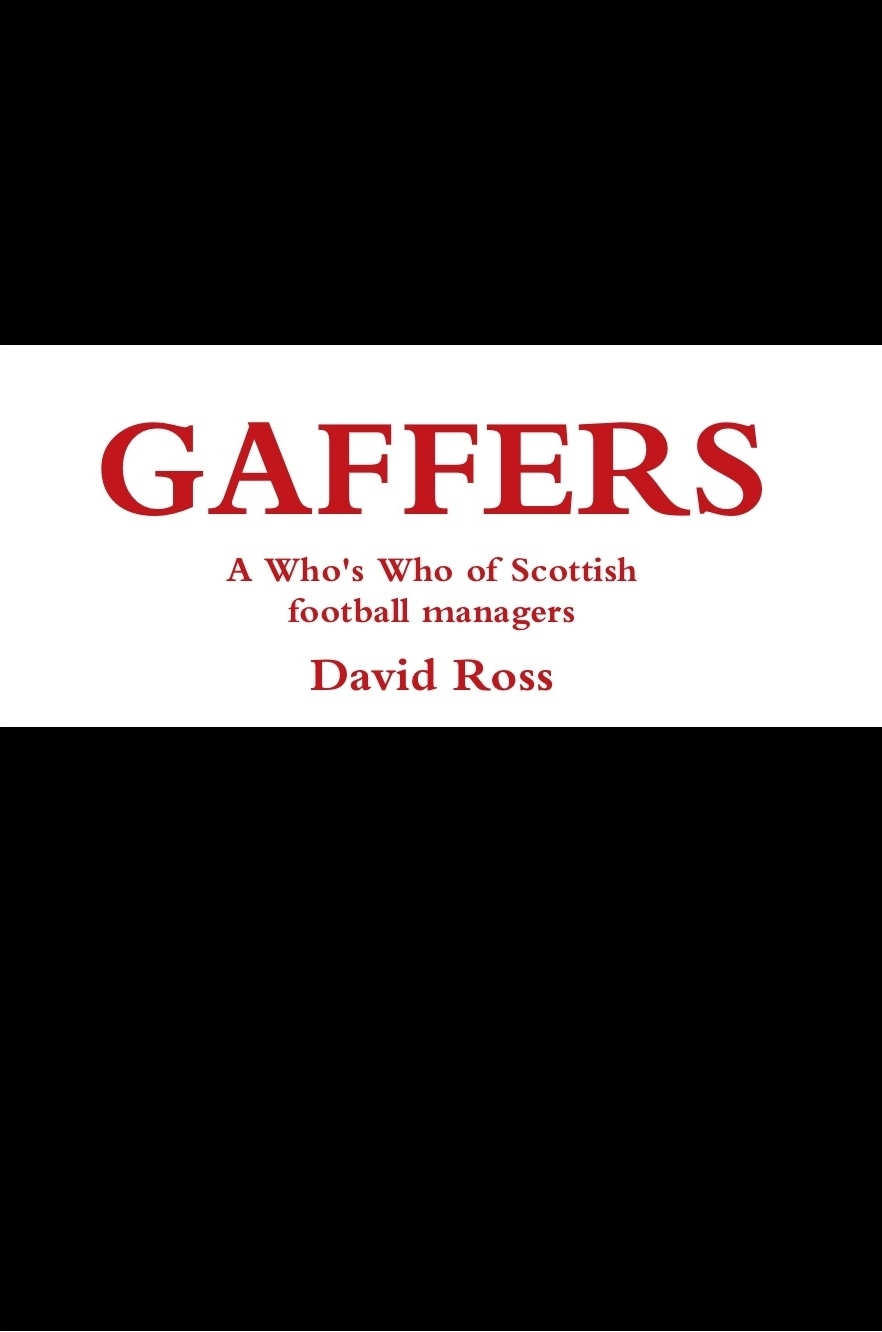 I should mention that this is now available as a download (epub for Adobe Digital Editions Reader, which is free) and very shortly epub for iPad, iPhone, iPod etc at the bargain price of £5.99. Why bargain? Because I don't understand why some books cost more as downloads than as physical copies. Believe it or not it was cheaper for me to get a hardback copy of the new Umberto Eco novel posted from the UK than it was to download it from either Amazon.com or Amazon Spain.

As I understand it epub doesn't work on Amazon Kindle. So anyone who wants this on Kindle has two options - wait for the Kindle edition to become available (no firm date as yet) or contact me personally and I can provide a pdf, which does work with Kindle.
Top

The second edition of this book is now available in print both on Amazon and, cheaper, here . The new edition is up to date as of the end of July 2012 with all the close season changes incorporated and 2011-12 honours in all four divisions and four national trophies added to managerial records (as well as Kenny Dalglish's League Cup win in England). There is also much new material on managers from times past that has come to light in the period since publication of the first edition with many more years of birth and death included.

The new epub edition will shortly be available on the Apple Bookstore but a pdf version can be purchased directly from me for £5.99. I don't understand publishing houses which charge as much for ebooks as for paperback and hardback and I will never do so. My ebooks will always be cheaper than print as you can see if you look here
Top

Users browsing this forum: No registered users and 38 guests