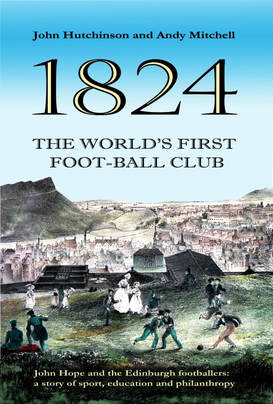 This is the story of the world's very first club dedicated to football, founded in Scotland in 1824. No other contemporary clubs are known to have existed, yet this one thrived for almost 17 years, giving an outlet for organised football to a generation of young sportsmen in Edinburgh.

In writing this definitive history of The Foot-Ball Club, John Hutchinson and Andy Mitchell detail why this club was so significant in the development of the games of football we know today. They have analysed the club's extraordinarily detailed archive which has survived intact, including membership lists, rules of play, accounts, letters and contracts - many of which are illustrated.

They explain how the club was run, who its members were, how they played and why the club fitted perfectly into the vibrant sporting culture which existed in Edinburgh at that time.

1824: The World's First Foot-Ball Club is on sale directly from the authors, price £11.99 post free (in the UK only). For further information, visit http://www.scottishsporthistory.com/wor ... -club.html

For the rest of the world, the book is available on Amazon: https://www.amazon.co.uk/dp/1986612449
All times are UTC
Page 1 of 1
Powered by phpBB® Forum Software © phpBB Limited
https://www.phpbb.com/