Hi Brian and welcome to the forum. Your first query is a tricky one. I can't find anything outwith the normal annual inter-league fixtures. There is nothing in the fixture lists for either 1951-52 or 1952-53 and no mention of any 'B' inter-league games in Bob Crampsey's centenary history of the SFL.

The 'normal' games v the Irish League for the seasons covering 1952 were on 26/9/51 at Ibrox and 3/9/52 at Windsor Park. Full details of these matches are available if that's what you are looking for but I'm sorry I don't know anything about a 'B' game.

Can anyone help here?
Top

Ah, then it may well have been a 'B' Division team rather than a Scottish League 'B' as such. Killie were in the 'B' Division in those days and were unlikely to have many players picked at representative level. Ralph Collins spent ten years at Rugby Park, playing in 330 first class matches, skippered the team in the 1957 Scottish Cup Final, also played in the 1952-53 League Cup final and won promotion in 1954 but to the best of my knowledge wasn't selected for a full appearance by the Scottish League.
Top

Then I suspect it was indeed a B Division team. I'll ask around and see what comes up
Top

My thanks to Killie programme Editor Richard Cairns who came up with the goods. It was, as I suspected, a 'B' Division team which met their Northern Irish counterparts on April 15th 1952 at Cliftonville. Richard has kindly supplied us with a programme cover but there are no other details of the game. Anyone with result, full line-ups, scorers etc, please post here. 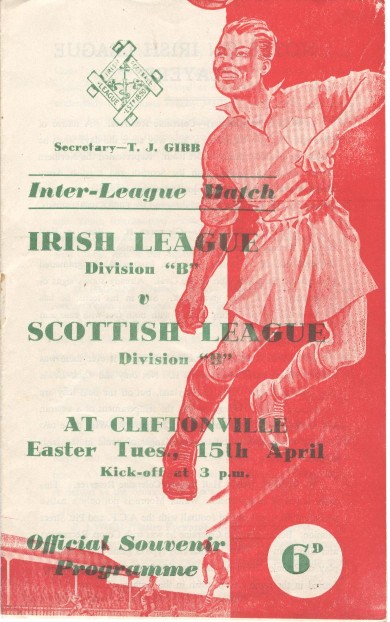 LEATHERSTOCKING wrote:It was a 0-0 draw.

God, somehow that feels like winning Pass the Parcel and finding nothing inside the last wrapper....
Fraser
Top

The (London) Times archive does not contain any mention of this fixture even with subsequent details provided and The Scotsman archive only goes up until 1950 so I'm outta ideas.
Top

The Times doesn't even have it down as a fixture for April 15th let alone give the result the next day. British online archives are really poor. AFAIK The Times is the only UK paper with a full archive and their Scottish football coverage isn't up to much, particularly the further back you go. For intstance the April 19th 1920 edition carries match rpeorts from the Old Boys Cup Final and Amateur Cup Final but not Killie v Albion Rovers in the Scottish equivalent. As you say The Scotsman got to 1950 and stopped.

One additional source of information generally which may not be that obvious at first glance is the New York Times. All editions from 1851-1922 are searchable free as pdfs. There's a lot more coverage than you might think - particularly during WW1. It's free again in online in html from 1987 onwards. But 1923-1986 is a paid service.

The only way to get the full details of this match would be to see a Scottish-based title from the day after the game. Anyone near the Mitchell?
Top

I've also got the programme for the match, and the original owner has helpfully written in the team changes and the scorers.

Scorers? Yes, according to my programme it was a 6-0 win for Scotland, four up at half-time, with the goals coming from Billy McPhail (3), Tommy Ring (2) and Dunky Smith.

scottish wrote:Anyone near the Mitchell?

The Glasgow Herald of the following day gives the score as 6-0 with scorers as per ScottishFA's post above. No teams are given.

Not a high profile game, I'd suspect - it wasn't previewed on the day of the game.
[url=http://www.PTEarlyYears.net/]Partick Thistle - The Early Years - A Club History Online[/url]
Top
Post Reply
15 posts • Page 1 of 1