From the late 1920s there was an organised programme of what was termed 'Community Singing' at matches in England beginning with the FA Cup final and by the 1950s apparently covering all significant matches at Wembley. Was there anything similar to 'Community Singing' in Scotland? The organisation was fairly formal in England with the FA awarding contracts to national newspapers to make the arrangements, which seem to have varied between the old News Chronicle and the Daily Express. I also wondered if there was much of a tradition of club songs developing in Scotland in the post-war period (like 'You'll Never Walk Alone' at Liverpool). I'd be interested in any information on this, especially anything relating to clubs outside of the Old Firm.
Top

I suppose the most well-known is the Hearts song - the tune being the same or very similar to the chorus from Flanders & Swann's 'Hippopotamus Song.' But I don't know how far back it goes.

The only other club-specific song with any kind of pedigree I can recall is The Celtic Song as sung by Glen Daly since the 1960s at least and which is taken from a Gilbert & Sullivan song from 'The Pirates of Penzance.'

At times clubs have used traditional songs which refer to their particular locality such as 'The Northern Lights of Old Aberdeen', 'The Road and the Miles to Dundee' and 'With My Big Kilmarnock Bunnet.' More recently Hibs had had 'Sunshine on Leith.'

While the 1960s saw the adaptation of pop songs by the terraces the 1970s witnessed a new phenomenon of the songs being sung 'straight' by fans (i.e. no altering of lyrics to suit team or players), often intended ironically when clubs were going through a bad spell (so bad we might as well sing this crap instead of praising the team). But as new generations started attending matches without any memory of the originals these songs ended up being regarded as club anthems such as 'Beautiful Sunday' (Dundee United) or 'Paper Roses' (Kilmarnock).

Unfortunately 'community singing' in Scotland is all too often heavily dependent on whch particular 'community' is doing the singing.
Top

Community singing became common at Wembley after war - cup finals, internationals of various types, other sports - and in Cardiff.

Did this ever happen in Scotland e.g. Hampden?
Top

A quick look at the newspaper archive shows that community singing was part of the pre-match entertainment at Hampden Park for the Scotland v England match. It is difficult to see a start date but there is reference to it in the 1927 match although it could refer to impromptu singing rather than being conducted.

The Motherwell Times (Friday 7 April 1933) reported on the 1933 international and said:

“A figure all decked in white sweater, white flannels and white shoes, looking more like a boxer’s trainer, conducted community singing, with much waving of arms. Sir Harry Lauder, kilt and all, but minus the crooked stick, got the crowd going with his old favourite, “The End of the Road”. What a volume of sound rose when the crowd got into the swing and let go with gusto, the old favourite “Pack up your troubles”.”
Top

Roy Orbison's 'Only The Lonely' has been the unofficial Airdrieonians anthem since the 1980's. It still gets played over the tannoy before every home game.
Top

I saw this on Twitter the other day, and somewhere I have something similar for Arbroath home games, also in 1927: 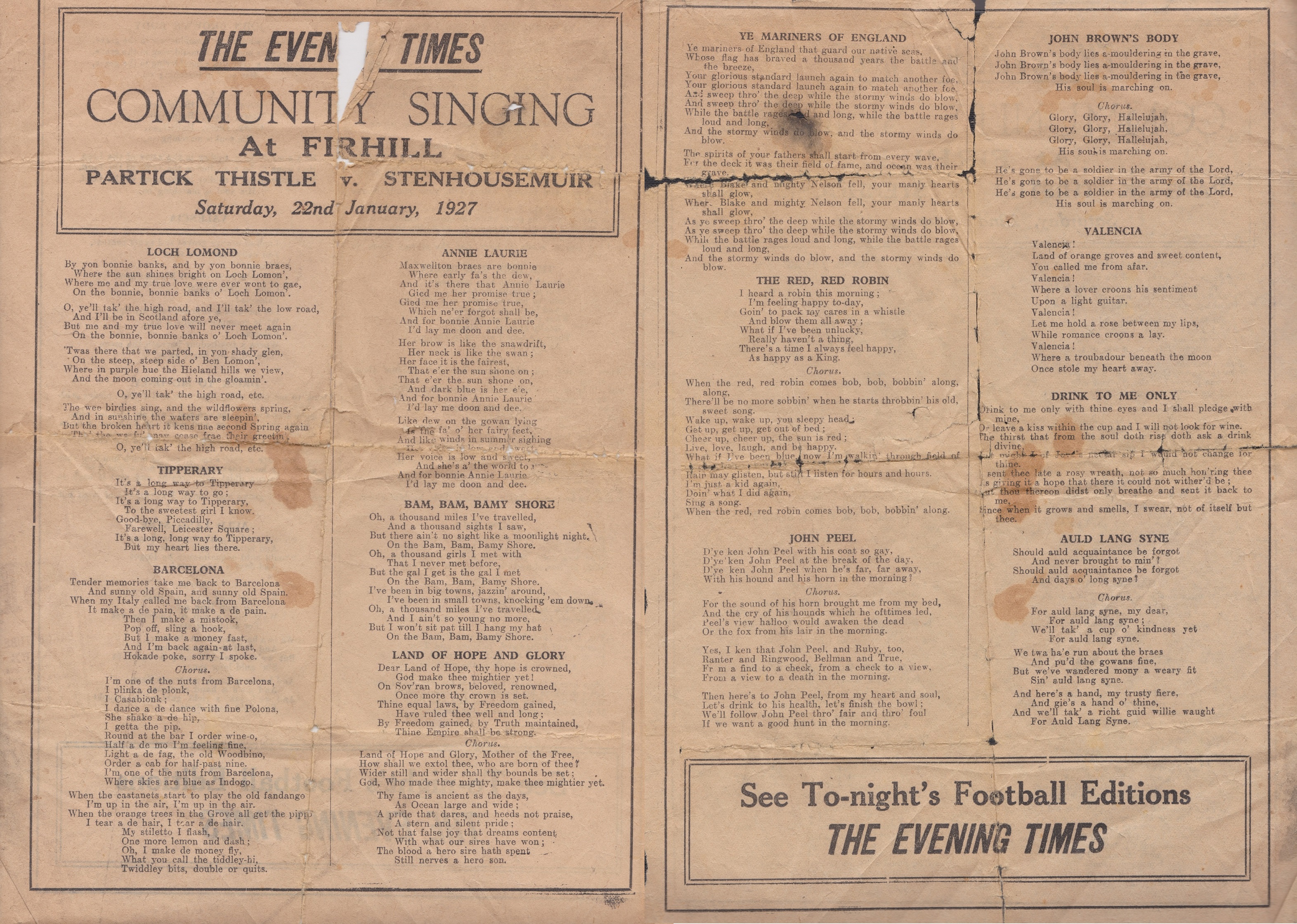